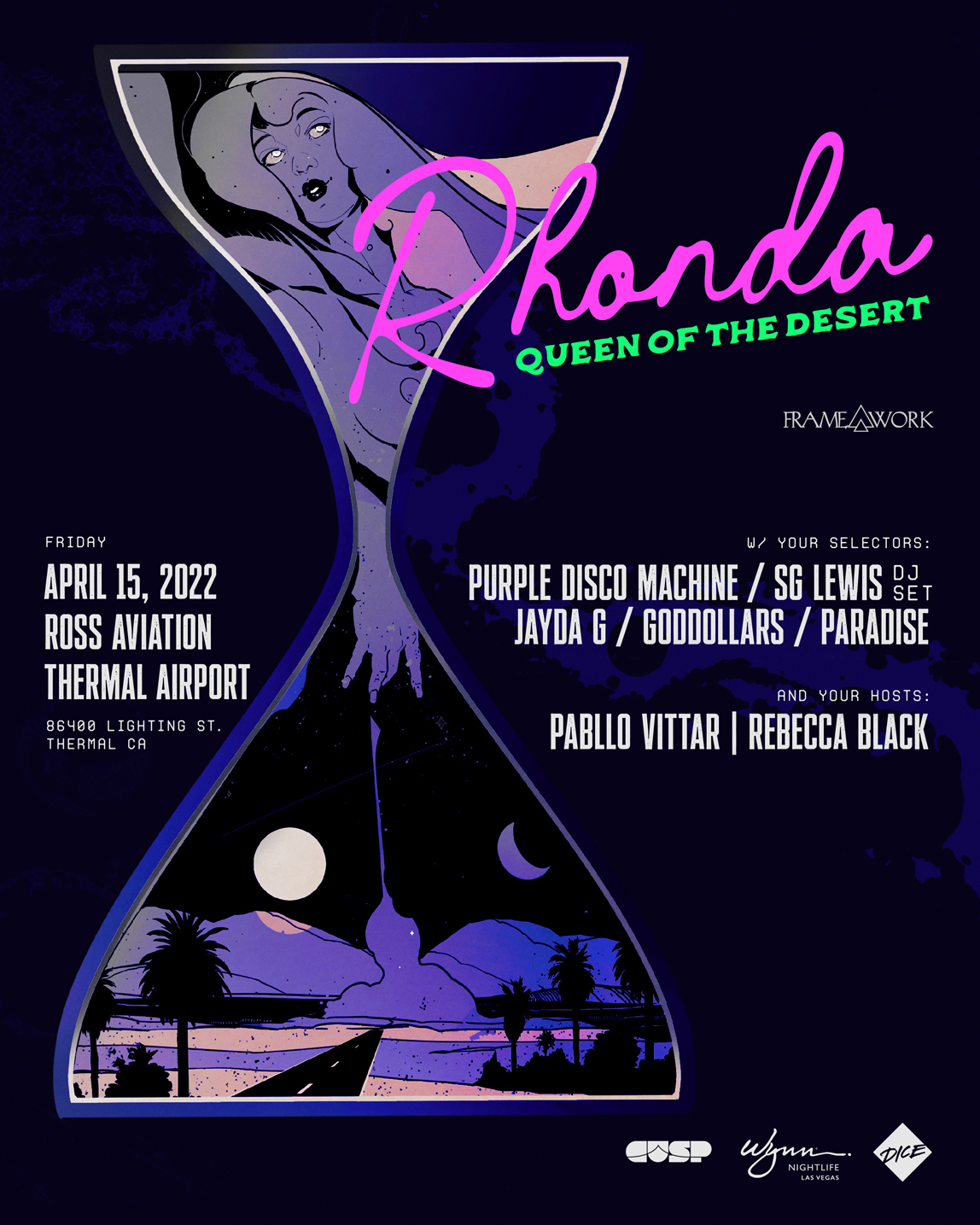 Framework is one of the West Coast’s most respected and pioneering underground electronic promoters, featuring footprints in markets across California, Las Vegas, Bali, Mexico and beyond. Its home base of Sound nightclub in Hollywood has been one of the few venues in Los Angeles committed to showcasing forward thinking house and techno for almost a decade, and Framework’s large scale events have blazed a trail by combining iconic LA locations, world class production and amazing dance music talent.

Having been integral to Coachella’s after hours scene since its inception, Framework has built a second home in the desert, hosting events across the valley from Palm Springs to Thermal. This Spring, Framework continues pioneering new ground, unveiling a never before used venue at Thermal Airport, and creating a bespoke after-hours location to showcase some of dance music’s most admired talents.

Friday night will see Framework and Rhonda pair up for their beloved Queen of The Desert concept, this time welcoming the disco funk master Purple Disco Machine, the next house crossover star SG Lewis and the inimitable disco queen of the night, Jayda G. Saturday, Framework aligns with Goldenvoice’s recently launched Palm Springs Desert Air concept, showcasing the best in house and techno with Ibiza heavyweights The Martinez Brothers going back to back for the first time ever with Black Coffee, with special guest from Ninja Tune’s much buzzed about Korean breakout, Peggy Gou. 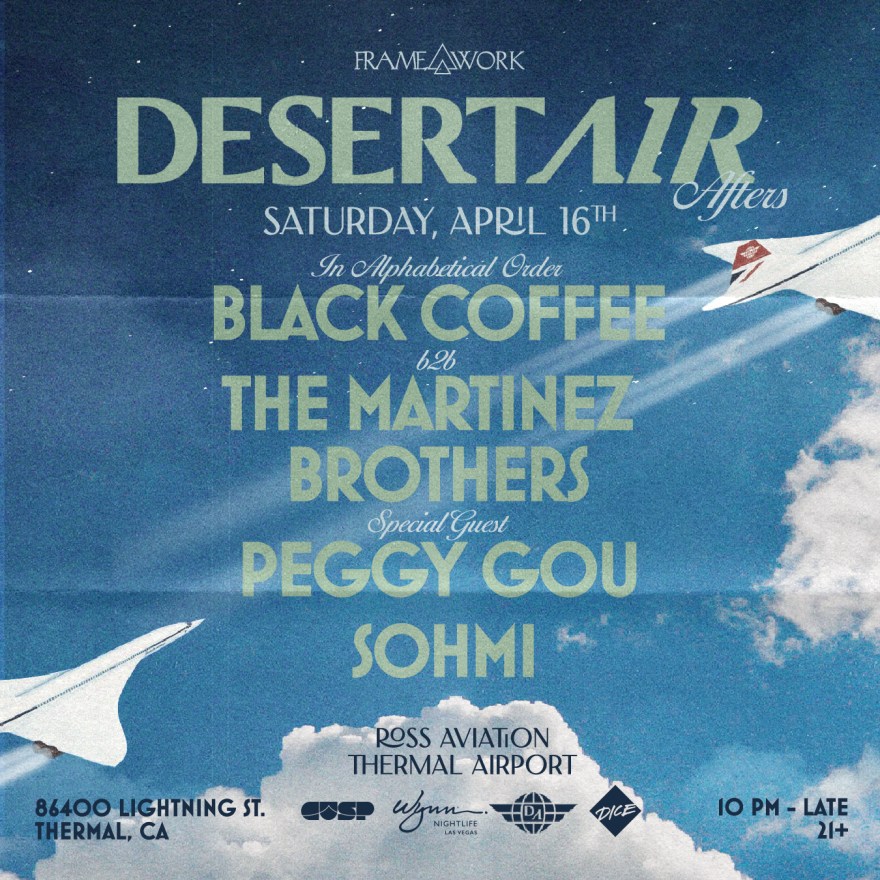 Sunday will see Framework team up with their Vegas partners, the Wynn’s Art of the Wild, which has built a reputation as the city’s must attend underground dance music event. Art of the Wild will dive into the left of center live house strains of Bedouin, a rare back to back performance from Crosstown Rebels and Day Zero visionary Damian Lazarus and the rapidly ascendant Michael Bibi, a set from Berlin’s Innervisions icon Dixon, and Miami’s Club Space resident and NYC house royalty, Leyla Benitez. 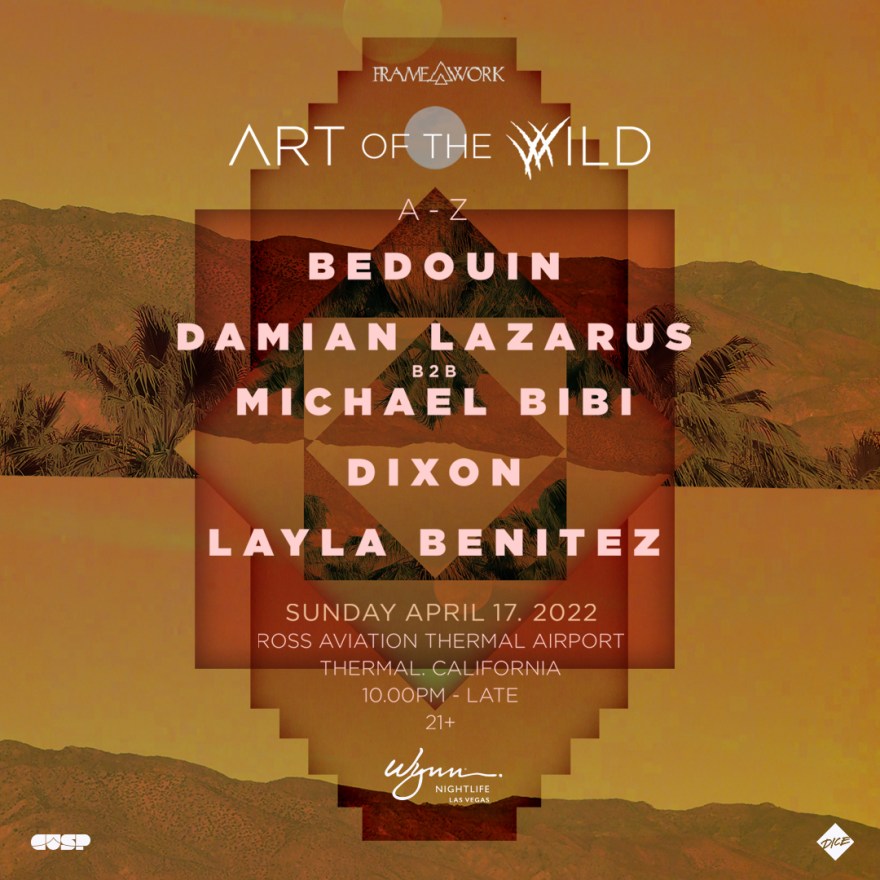 The back drop for this unique trio of parties will be a never before used hanger located at Thermal Airpot, just minutes from the Coachella Music and Arts Festival grounds. Framework will transform the venue into an after-dark desert oasis, with world class lighting provided by fellow Yuma tent collaborator, SJ Lighting. Also debuting on-site will be the first ever walk-in Framework store, complete with brand new Spring line.

Presale registration will be open from March 22nd to March 25th. The presale will occur March 25th at 10AM PST and general ticket sales will start on March 25th at 12PM PST.

Tickets for Art Of The Wild here 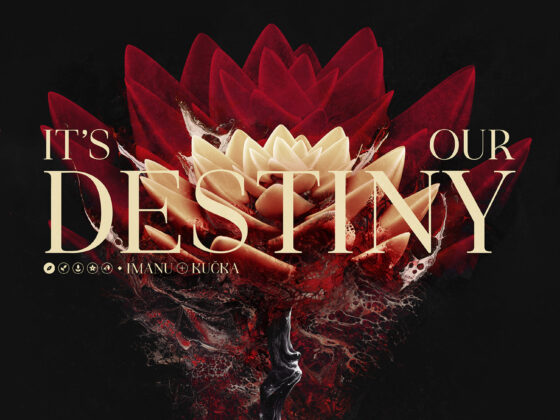 MASTERS OF THE ETHEREAL IMANU AND KUČKA TEAM UP FOR IT…. 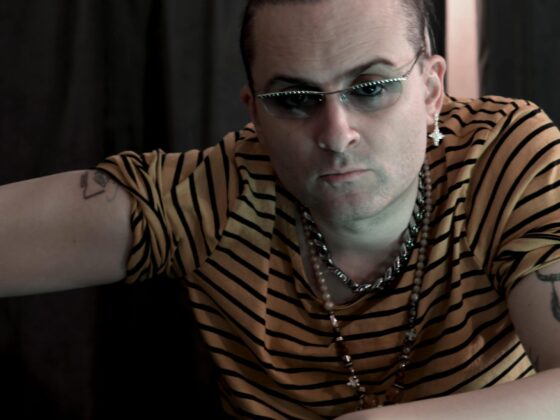